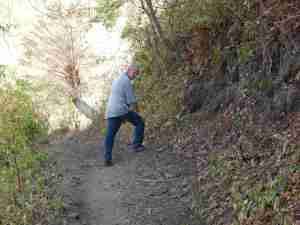 When Laura and I were still at Montaña de Luz we took a few trips to Danli, a small city about an hour east toward Nicaragua.   A few years back, the Catholic Church built a monumental cross on a hill overlooking the city in the style of many large cities.  It’s become quite a draw for pilgrims and tourists who want to climb the hill and see the cross and the view of the city.  Unlike a lot of roads in Honduras, this one is well paved with hard concrete.  Also, it mostly climbs straight up at a steep angle, rather than zigzagging, perhaps to offer a penitential journey with the Stations of the Cross along the way.  On our second or third trip to Danli, Laura and I climbed up to the cross.  The view of the city and the surrounding mountains was sensational, well worth the strenuous climb.  I recall watching the others who climbed up and down with us.  Mostly, they zigzagged from one side of the road to the other to lessen the strain on their legs and bodies.  Here in Concepción, Laura and I walk up to the Shoulder to Shoulder clinic, about twenty minutes, every day.  The cobblestoned hill out of the town is as straight and steep as that hill in Danli, but not nearly as long.  We’re a little winded at the summit, but the cardiovascular workout is worth it.  The colegio (school from seventh grade through high school) is located just outside our town along the same route.  We’re usually walking at the same time the students are walking to school.  Most of the students take that same zigzag route up the cobblestone hill that we observed in Danli.  They’re younger and in better shape than Laura and me.  At witnessing this, I’ve pondered, is there something in Honduran DNA that demands crooked journeys, or are these kids just lazy.  But then again, nothing here seems to travel along straight lines.

Today we had a very personal, even a bit frightening, experience of this phenomenon.  Two Shoulder to Shoulder medical brigades arrived here this past weekend, one from Virginia Commonwealth University and one from Brown University.  Laura and I are always very busy when the brigades are here.  We like to meet them when they first arrive to introduce them to Shoulder to Shoulder’s mission and projects, and then once again while they are working to take photos.  We saw Brown, a small group of six, on their first night at their hotel in Esperanza.  We also traveled out to their site in Guachipilincito in a pick-up truck on Sunday.  We did this just to see their site because we’ve never been to Guachipilincito.  It’s actually very physically close to Concepción, but because there are no such things as direct routes, it takes over an hour with a four wheel vehicle.  We learned that there was a more direct footpath that only took an hour and fifteen minutes.  We got directions and set out walking at seven this morning to avoid the strong heat. 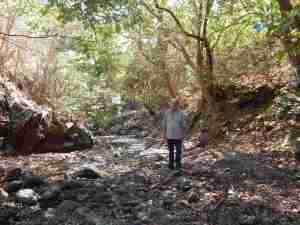 We followed our directions well, but still almost missed the first turn off a main dirt road.  I asked a man in his house and discovered the path we needed started at his driveway.  He also told us to go straight up the hill from his house, through the gate at the top, and then straight down along the well traveled path.  But he also made a sweeping gesture with his arm off to our right that I knew was the general direction toward Guachipilincito.  We found things just as he said, the gate at the top and a well traveled path zigzagging down a steep hill.  But also at the gate was another path going off to the right in the general direction of Guachipilincito.  We walked two thirds of the way down the steep hill and into an area that opened up to the mountain terrain.  Seeing the vista I was certain we weren’t on the correct path.  We were traveling in the opposite direction of where we were going.  I could not see or imagine how the path could right itself toward Guachipilincito through the rough terrain.  I was convinced that we needed to take the path to the right of the gate.  The man’s sweeping arm gesture must have been meant to indicate this.  Laura wasn’t as certain as I, but generally defers to my sense of direction.  We hiked back up the mountain and took, what became, the path less traveled.

Though the path was overgrown at times (and me without a machete), though we climbed over or under five or six barbed wire fences, we consistently moved correctly west.  I saw glimpses of what I believed was Guachipilincito.  When we got to a bit of a clearing, I definitely could see Guachipilincito.  It wasn’t very far away, a mile at most, but between us and it was a deep ravine and a treacherously steep mountain.  Disappointingly, I could also see a well traveled path on the opposite mountain.  On that path, apparently effortlessly traveling to Guachipilincito, was a cow, followed by a man, followed by a woman.  As close as we were, there did not appear to be any means to get to that path.  Our path was now becoming somewhat unpathlike, and we eventually ran up against a very impassable barbed wire fence.  We had gone the wrong way.  We were now two hours into our one hour and a quarter hike.  We dreaded going back.  If we went back we’d probably just go home, feeling defeated.  Instead, we walked down the ravine, hoping to find a path up on the other side.  We landed in a dried up river bed (where I also saw cows, but Laura didn’t believe me) with no discernible path up the other side.  But I did see a rock bed where water must cascade down into the river during the rainy season. It led directly up to the path.  It would be a steep climb, but only about 300 yards up, and then we’d be home (or Guachipilincinto) free.

Tough going, but we got to about thirty feet below the path.  That was where the rocks ended and the loose soil began.  We were now actually mountain climbing at about a seventy-five degree angle.  I was probably fifteen feet away when I made the terrible mistake of looking behind me.  It wasn’t that far, but is a hundred foot drop any less mortal than a four-hundred foot drop?  I froze.  But for all of fifteen feet, we were going to have to go back.  I started to slowly slide back down.  But, I found a small hope in the thicket to my left.  I wiggled my way in.  I zigzagged under, over, and through the brush, ascending ever so slowly that last twenty feet.  I made it to the path above.  From my now secure perch, I directed Laura through the same thicket.  We both made it, unintentional mountain climbers.  The rest of the journey was quick and uneventful.  We had left at 7:00 and arrived at the clinic at 10:30.  It had been a very straight journey, but I now know why it is sometimes better to trust a crooked path.  We walked back the long way. 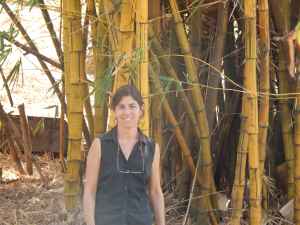 The shortest distance between two points is a straight line.  That’s a mathematical truism.  But as I found out today, distance seldom equates with comfort and security.  The rugged terrain of Honduras makes traveling in straight lines a virtual impossibility.  The terrains encountered in relationships and in service are often just as rugged.  Even though we so often look for that shortest route, more often zigzagging is best.  Those high school students are not lazy.  Though they themselves may not recognize it, they are in fact very wise.